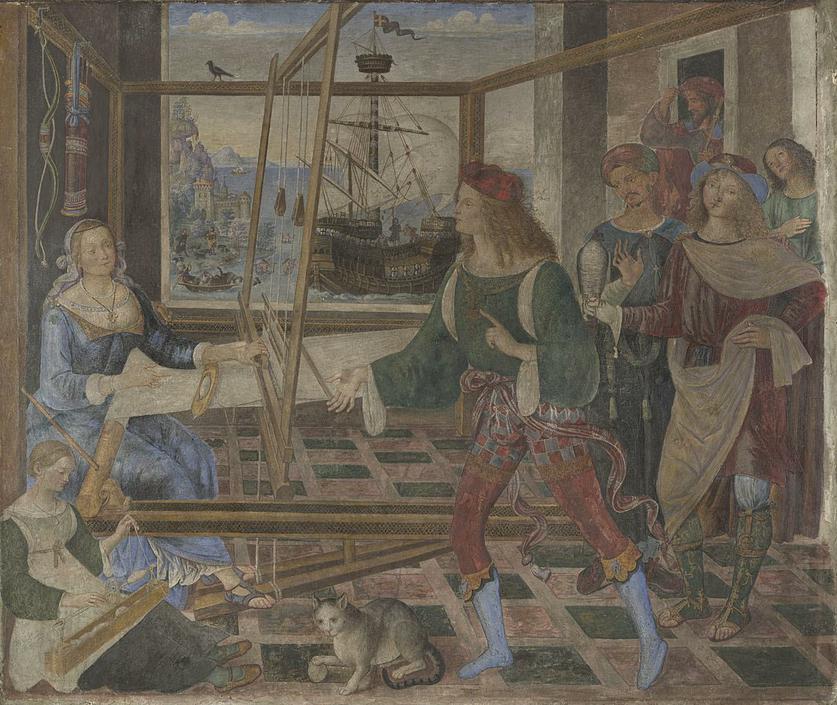 The 2017 Take One Picture is Penelope with Suitors, about 1509, by Pintoricchio. This painting is part of the group of three Frescoes painted in a room of the Petrucci Palace in Siena in about 1509.

“This is a very fluffy cat” Lacey Reading (aged 4)

“The cat is from the painting” Rory McCarron (aged 5)

The children worked very hard to create a collage using a variety of mixed media. The children enjoyed exploring the different colours and textures of the different materials and getting messy using the sticky glue. Children were able to make cross-curricular links between their Maths work on ‘2D shapes’ and their Art as they identified different shapes within the picture. During a circle time we enjoyed speaking about our different pets at home and we pretended to be cats using role-play.

After looking closely at Penelope and her Suitors the children were fascinated by the shoes that were worn by the subjects in the picture. We looked at lots of different pictures of shoes through the ages and discussed shoe design and making.

The children designed their own shoes in 2D and this inspired their final design on an old shoe they brought into school.

Once they were finished we took individual photos of each shoe but the children wanted to make a big shoe image and we started to play with our photos.

I might be a shoe maker when I am older – Jamie.

My shoe is desirable – Cerys.

I liked my shoe because it was glittery and prettier than before – Sofie.

We have 50 shoes and 4 small photographs in frames.

Year 2 concentrated on the ship in the distance. In Year 2, our topic this term is 'Pirates and Holidays'. The children thought that there may have been pirates on board! After listening to the audio, the children thought that the people on board may be in trouble. We thought about what it might have been like to be on board and whether we would like it or not. Year 2 wondered if the people in the picture could see the ship and whether those in the ship could see what was happening on the shore. We thought about portholes and the materials they are made from, linking our ideas to our Science learning in Year 1. We discussed how we could make our own portholes. The children loved learning about Animals last year, especially those under the sea! We used those interests to create portholes. The children used paint, felt tips and a range of materials to create their pieces and focused on making the fish appear to be 3D, instead of flat against the background. We called this creating an 'effect'.

I enjoyed making the tape double-sided to stick on the pom poms and then the fish to give the 3D effect.    - Henry

I liked putting the fish and sea life in because it’s colourful. I had to be careful not to put the sea life under the porthole edge or you wouldn’t see it!

I like cutting out the fish, though it was tricky! But my cutting skills improved.   - Cory

The Year 3 class were very interested in what Penelope was doing when they were first introduced to the picture. One child thought that she was playing a musical instrument with strings on (meaning a harp) and this fascinated them. Another child realised she was making something but couldn’t explain what as the children hadn’t experienced weaving before. So this inspired us to have a go at weaving ourselves so the children could experience it first hand. They found the story very interesting about how Penelope never finished her weaving and had to unpick it every night.

We begun by decorating our paper plates with patterns and colours inspired by the painting and then wove a circular shape using a variety of wools and ribbons to explore the textures. The children wanted to leave it partially unfinished to link to the story of Penelope. We also looked at weaving in our Prehistoric Britain topic and how it was used to make early homes.

Another thread from the painting that the children were drawn to were the fleet of boats in the background. They were curious to know where they were going and what it was like on the boats after hearing the creaking sounds from the sound scape. We looked at galleons and life on board as a sailor and then the children designed their own galleons using patterns that they had drawn after listening to the sound scape. They drew paper templates for their designs and transferred these onto clay, building up a 3D boat. The children then scratched their patterns into the clay and used wooden stamps to press in shapes and patterns onto their design. The children learnt about firing the clay and were also able to glaze them afterwards. They then made a woven sail to go onto their galleon with their own choice of colours, wools and ribbons and attached it on using a glue gun and kebab stick!

I found our class project fun because you can see a story in your mind about a boat sailing into a mystery portal. Catrin Aged 8

I learned to be gentle and take care when weaving. I felt that I was going to love it when I was finished. Edgar Aged 7

I enjoyed making the galleon the most because I like using clay. I thought it was amazing!

4GK interpretation of ‘Penelope and her Suitors’

After listening to the soundscape and interpreting the sounds by drawing pictures, the class were shown the full painting and listened to the soundscape again. During a second session the children discussed where the sounds were represented in the picture and tried to imagine what the picture was about. Once told the story behind the picture, they chose their favourite parts and asked many questions about the details. The children were fascinated by the cat and the loom in particular so we decided to investigate further.

First task was studying cats by sketching them in a variety of forms and then deciding to make cats out of clay. We also chose to glaze the cats with colours seen in the picture, especially the carpet and clothing.

After that we investigated what a loom was, how it worked and made our own out of cardboard to make a ‘Mat for our Cat.’

I liked weaving the mat as you got to make it ourselves.

I liked making clay cats as we got to mould them. We put paper inside and moulded round it to stop it blowing up, if we didn’t it would explode.

I liked weaving as it was a new experience and not something I would do in my spare time. I might do some more at home now!

I liked the cat colours. They are bright and nice even though they are not real cat colours.

I liked when Penelope kept believing her husband was alive when everyone else thought he was dead. It was hope.

The children were introduced to the picture through the soundscape. This really captured their imaginations and led to a heated discussion about what sounds they had heard and what story they told.

When they were shown the picture, they were determined to find all of the sounds which they had identified. This encouraged them to study different areas of the picture more closely. This in turn, led to a series of questions e.g. “Why are there pigs in the background?” At this point I told them the story of Odysseus.

The children were also interested by the use of colour and pattern. Their attention focussed on the tiled floor. They asked what tiles were like when the painting was done. We looked at different tile patterns and noticed that most had some sort of symmetry.

Using their sketch books, they tried out different patterns, two of which were chosen. Mrs Smithies demonstrated how to create a polystyrene tile print.

The children then indented the tile with their chosen patterns and created a repeating tile pattern.

Quote by Oliver McCarron aged 8: ”It was much harder than I thought it would be to put my design on the tile. In the end I had to make my ideas simpler.”

The slideshow shows photographs of the process

As a class we listening to the soundscape twice, the first time we listened we wrote words down, any words that came into our heads. The second time we listened we drew pictures for what we heard. We then shared our words and pictures together as a class. We found some common themes that helped us decide what to do. We all had either a picture or the word pig, each of us heard the pigs squeals at the beginning of the soundscape, so decided to look at pigs. Although trying to find the pigs in the picture was a bit tricky.

We decided to make clay pigs of all forms shapes and sizes, we had to mantipulate the clay into different shapes and found it difficult sometimes because our arms, legs and tails kept falling off. Miss.Pearson showed us how to blend the clay and remove the cracks to help keep the clay together so that different parts wouldn’t fall off. Once they had air dried we painted our pigs.

We really enjoyed creating our pigs.

Background to 5JK’s interpretation of Penelope and her suitors by Pinturicchio.

During the autumn term 5JK have been studying the Ancient Greeks. The Greek heroes have been of particular interest and the exploits of Odysseus a favourite. Although we only intended to explore the story of Polyphemus the Cyclopes the painting drew us into a deeper study of Homer’s the Odyssey. The style of the clothes and ships was discussed and this helped the children to realise that this old painting at 500 years was only a small fraction of the age of the original stories which could be 3000 years old.

5JK is a “busy” class and doesn’t like to miss a chance for active interpretation. Over an afternoon we recounted the stories shown in the picture and I explained how Odysseus reacted to finding four suitors greeting his wife. The idea of what happened next became the theme for their actions.

A montage of the resulting pictures was put together during an ICT lesson.

When we looked at the painting of Penelope with Suitors, we all had different responses and noticed different things. Some children were inspired by the patterning in the clothes; others wanted to explore the idea of ships and rigging; several children noticed the animals in the painting and wanted to investigate this further. We decided that we wanted to create artwork that reflected our different viewpoints.

We created individual sketchbooks, which allowed the children the freedom to explore their own responses to the painting. Children enjoyed experimenting with different media and techniques.

Take One Picture Exhibition arranged by Mrs McCathie - A big "thank you" to all the parents, grandparents as well as carers who attended our wonderful school exhibition. We are ever so proud of all the children's work.